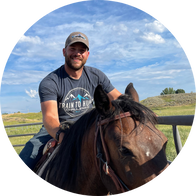 Growing up, I would always be coming up with new business ideas.

My parents would hear out my idea, and then respond with "add it to the list".

I don't know what started it, but I have always had a fascination with business. What made some businesses extremely successful, and others struggle? Why would some business owners settle for "that's just the way it is" and others would take on the unknown. Often finding themselves at a level of success they never thought they would achieve.

Fortunately, the work ethic I learned working on my family farm growing up made an impact on the trajectory of my career and I started to progress quickly through the company.

One of the sayings I commonly use is "you can't read the label from inside the bottle".

Throughout my journey, I could never see exactly where I was going or why.

Little did I know it was going to be a 12-year-old mustang named Dart that was going to be my inspiration.
​Dart is a horse that was originally purchased by my father-in-law from a local facility that trains untouched mustangs and finds them homes. My in-laws have always had horses. After meeting the head trainer Joe at church, my father-in-law was bought in on the idea of adding a mustang to the herd.

After months of training, Dart arrived at his new home. Received some attention; but, life got in the way. The work with him stopped. If you know anything about mustangs, they are not like your typical domestic horse. They aren’t a “set it and forget it” proposition. They need to be continually worked with, or (especially for a horse that spent 11 years in the wild) they can regress.

That is exactly what happened to Dart.

He went from being able to ride, pack, and cross water to struggling to get a halter on him.

The truth is this was no fault of his own.

My wife and I had given birth to our first child shortly after Dart arrived.
(To say I was busy is an understatement.)

As winter rolled around, I started hearing negative comments about Dart, and about the possibility of getting rid of him.

That struck a chord with me.

His current state was not his fault. It was clear he could be an amazing horse (he had already demonstrated that); but, he needed someone willing to take the time to work with him.

I could see something in myself and my journey in Dart’s situation.

I’ve had big dreams, showed people what I could do, and regressed. I feel like people question what I am capable of, and (for some reason) I can get in my own way and fight change.

So, I decided Dart and I are destined to take this journey together.

To prove to people never to judge people (or horses) by their current state. Rather, to look at what they could be and to help them reach their potential.

I have made it my mission to document not only Dart’s journey; but also, my journey in horsemanship.

I was around horses when I was young; but, not enough to have really learned anything. I always had an infatuation with them, but never anyone to teach me anything.
Now with the people I have around me, and the abundant information found on the internet, not having personal mentorship is no longer a valid excuse.

I never thought this was going to be the direction my life would take; but, who ever said the choice was up to us?

I feel my life experiences have built up to this.

Where is the journey going to go? Who knows!?

But, I am glad you are hear to enjoy it with me.

It is great to meet you!

It is my hope that the knowledge, experiences, and resources I come across help you on your journey and are pieces of the puzzle that help you make all of your dreams (and more) come true.